Oooh, when the lovely people from Ribena, sent me this list of “Pocket Playground” ideas… I knew I had to share it with you…. I love the idea of carrying 8 different items and being able to turn these 8 items into 50, asyou go play opportunities. Read all about the importance of play here: Ribena Plus Play Report – a fantastic resource and source of information for any parent.

I am telling you – the next long train journey or holiday we go on, I WILL be taking the play list, plus the 8 items with me! FABULOUS! 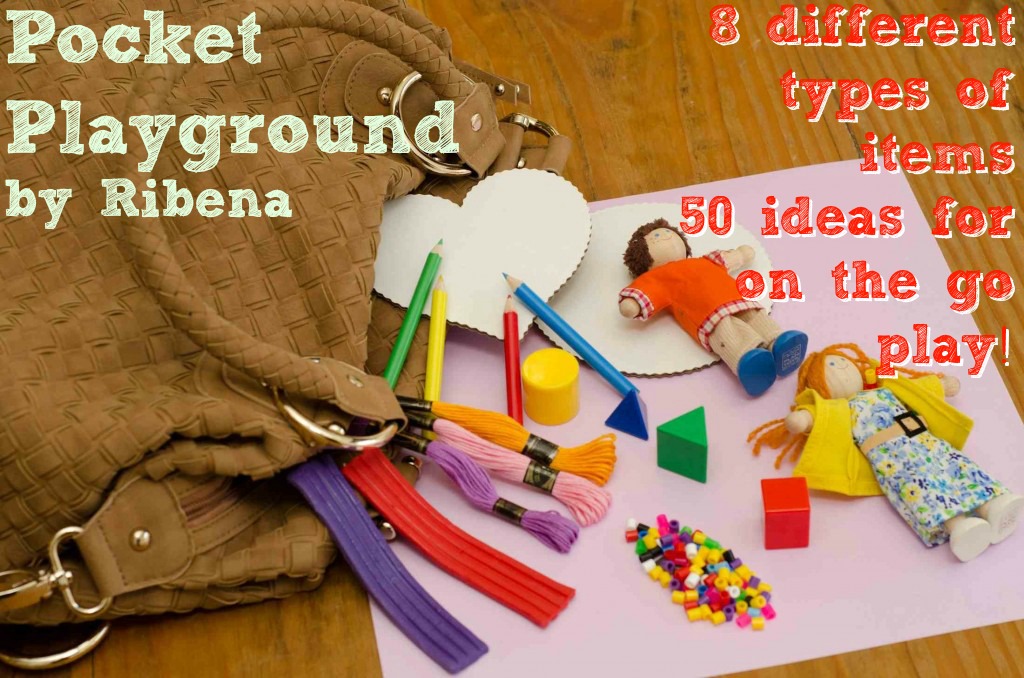 (it helps that we have these exact same dollies already!!!!)

50 things to do with the Pocket Playground

2.   Play ‘hot and cold’ by hiding toys and answering hot or cold to questions from other players trying to find them

3.   Create your very own board games using cardboard, pencils and wooden shapes / people as pieces

5.   Long hair is perfect for braiding using the coloured thread

7.   Design and decorate your own paper crowns

8.   Create a town for toy people using the modelling clay to make trees, houses and streets

9.   Create your very own game of snap using paper and pencils

10.Make paper airplanes and see how far they fly

11.Learn the art of origami and make a bird with flapping wings

12.Make masks with thread and paper and decorate them with beads and drawings

13.Make a concertina fan with paper and colour it in

15.Create famous landmarks with the blocks and modelling clay. Who can make the Eiffel Tower or the Angel of the North?

16.Build a house for the toy people using cardboard, modelling clay and pencils

17.Make impressions in the modelling clay with things from around your home, garden or things you have collected on family days out e.g. shells, leaves and tree bark

18.Take leaf, bark and coin rubbings with the paper and pencils

22.Build a tower with the blocks. How many blocks can be added before it tumbles down? Who can build the highest tower?

23.Shut your eyes and identify the shape of the blocks by hand. It’s not easy!

24.Create a dream catcher with cardboard, beads and thread

25.Create a ‘magic bird’ spinner – draw a bird on one side of a circle of card and a cage on the other.  Make two small holes in the centre and pull through the thread, making loops for fingers at each end. Wind up each piece of string (by spinning the card round) and then, once wound up, pull the string tightly at each side – the bird will seem to appear in the cage!

26.Create medals for games, using the cardboard, modelling clay and string – first, second and third – and use these for whoever wins!

27.Make a rattle – attach beads to a piece of card using the thread and attach to a pencil.  Then when you twist the pencil between your fingers, the beads hit the card and make a sound

28.Wherever you are, arrange some objects and draw a still life picture with the paper and pencils

29.Make a cardboard robot, using the thread to hold it together and beads for eyes.  And give it modelling clay hair

30.’Names in the hat’ – everyone writes names of well-known people on pieces of paper, folds the paper and places in a hat or tub.  Then take it in turns to pick a name out and describe that person without using the initial letter or any rhyming words. Go through as many words as possible in a time limit

31.Use the thread for finger knitting. Make mini scarves for the toy people

34.Make your own beads using modelling clay and thread

35.Make a mini game of draughts

36.Create sculptures of your family using the modelling clay and beads

37.Write down some objects on pieces of paper and fold them over. Take it in turn to pick an object and mould it from modelling clay. The other player(s) have to guess what you have moulded

38.Make your own Bingo game using card, paper and pencils

39.Draw lots of circles on a piece of paper. On the first go one player draws an object – e.g. cat.  The next person has to guess what it is and then draw another object in the next circle which begins with the last letter (so perhaps a tiger) and so on

40.Draw a well-known person e.g. a TV, celebrity, sports star or politician – everyone has to guess who it is!

41.Have a game of noughts and crosses or hangman

42.Make a fortune teller – folding your paper into a ‘rose’ and using it to tell the future!

44.Play ‘Why? Because.’ Each person writes down a question beginning with why (for example, ‘Why do dogs bark?’). Fold the top over to hide the question, and pass to the next player who, without looking at the question, writes an answer starting with Because (for example, ‘Because chocolate tastes good’). Then read out all the questions and answers – there’ll be some funny answers!

45.Play a game of ‘Monster Consequences.’ Draw a head on a piece of paper, then fold and pass on. The next player draws a torso and passes it on. The next person draws legs and the next draws feet. Open out the paper and see what monsters you’ve created

46.Play a game of ‘Written Consequences.’ Along the same lines as Monster Consequences but instead of drawing a monster, write down in turns: well known man’s name, well known woman’s name, a particular location, he said, she said and then the consequence. An amusing story should unfold!

47. Trace around your hand and adorn your drawn hand with jewellery, either drawn on or using the beads

48. Put on a play with the toy people and the objects

49. Make little drum kits with the wooden shapes and pencils

50. Play ‘Mini Boules’ with by rolling beads. Use the paper as your boules green

What do you think? Isn’t this simply FABULOUS? So many great ideas in one little bag of “bits”. Hooray for Pocket Playgrounds and on the go games and activities.