I have a very special guest post for you to day from a friend and author Kate Thompson. She is publishing a new book The Allotment Girls at the end March. As an avid reader, I love any new an inspiring reads.. and The Allotment Girls is one of them.

Note: This posts contains Amazon Affiliate links – should you choose to click on them and buy through them, I will receive a small commission towards the upkeep of this site. 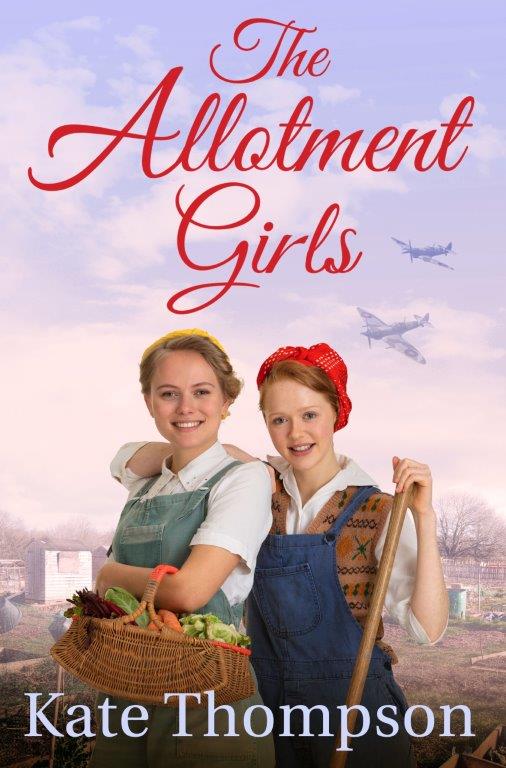 The Schoolboy Gardeners of Russia Lane

The weather is growing milder and the alchemy of spring is working its magic. The dull brown earth has begun to warm, and a blanket of green is at long last spreading. Hooray!

If you are one of Britain’s 27 million gardeners, you’ll be thinking about your neglected borders and what work needs to be done to prepare the soil for sowing. Spare a thought, then, for the gardeners of wartime East London, who not only had to contend with chapped hands and creaky joints when digging over their allotments – but also shrapnel, rusting bombs and the odd body part! 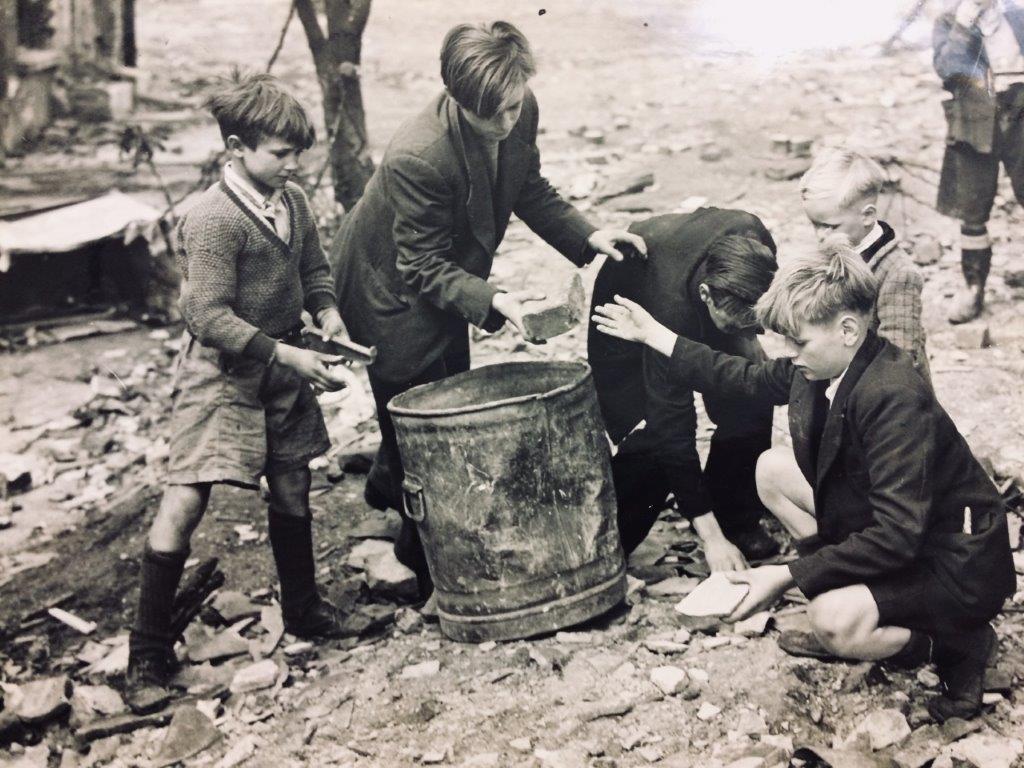 Seventy-five years ago this spring saw the blossoming of a fearless new breed of gardener, the pioneering bombsite allotmenteers, who set about transforming bombsites into thriving gardens.

By 1943, the East End was war-weary, exhausted and stewing in poverty. The Blitz had laid waste to vast swathes of slum housing, and shattered residents were coping and cracking with the privations of war. Driven by hunger, a resourceful group of gardeners formed. Calling themselves the Bethnal Green Bombed Sites Producers’ Association, they turned their formidable green fingers to converting concrete tombs. Using elbow grease, imagination and pierced dustbin lids to sift the earth for shrapnel and glass, over 300 men, women and children of the borough transformed the darkest of death traps into verdant green allotments.

Where once civilians had been buried and crushed under tonnes of high explosive during the Blitz, new life blossomed. Led by local councillor Sir Wyndham Deedes, who had taken up Churchill’s rallying call to arms to ‘Put your garden on war service’ the Dig for Victory scheme took the East End by storm.

East Enders had to dig deep – literally and figuratively speaking – sometimes going as deep as six feet to reach soil not made toxic by bombs. All sorts of queer treasures were unearthed – oyster shells (the staple diet of the poor), crinoline and bones, pottery, stirrups, clay pipes, jewellery and even the old corset.

By the summer of 1943, allotment fever had gripped the East End. Residents who had dared to stay had created idiosyncratic vegetable plots from old baths, canes and packing boxes. Gardens now bloomed in the most curious of locations. Marrows grew on top of Anderson shelters, tomatoes appeared on factory window ledges and haricot beans grew in place of hopscotch in school playgrounds.

Where old houses had been blasted away, gardens, chicken coops and rabbit hutches had been hastily constructed from scrap, the greenery incongruous amongst the rubble and fire-scorched buildings. Each site across East London contained something different and showed the mark of human ingenuity.

Thousands of shirkers might feel ashamed of themselves if they could see what people are doing in Bethnal Green. This experiment shows that with hard work and relatively little expense of money, even Bethnal Greeners can make their contribution to food production, declared a letter to The Times, somewhat condescendingly.

Even kids got involved. Russia Lane in Bethnal Green contained some of the worse slum housing in the borough. The notorious soot-stained tenements housed the very poorest folk in Bethnal Green. Huge families were squeezed into the tiny flats, including one mother of 25!

‘My best place to buy cialis online mum, Flo, was only 4ft8, but I saw her punch a man down three flights of stairs for slapping me when I was a kid,’ recalls 83-year-old Ron Hilson. ‘She lost a sister, Roda, in the Tube disaster in ’43. Another sister, Maud, was decapitated by a lorry in the blackout in ’45, and her son Teddy died of TB in ’46. She was so grief-stricken, she lost all her hair. But she never gave up the fight. The war brought out the strength in women.’

When Flo and the other women of Russia Lane went into war work in the factories, and with many of the borough’s schools closed down or evacuated, it would have been easy enough for Ron and his pals, Frankie Tovey, Ronnie York, Joey Donnovan, George Quinn and Ken Cushway, to get into mischief. Instead, the self-styled Schoolboy Gardeners of Russia Lane borrowed rakes and shovels from George’s dad, who owned stables, and set about transforming a bombsite into a Dig for Victory Allotment.

A toxic rubble and scree-filled hole in the ground in a bomb-battered slum is hardly the most promising circumstances in which to grow fruit and veg, but that didn’t deter the Schoolboy Gardeners. Once the Heavy Rescue Service had removed rubble and masonry, the boys used dustbin lids pierced with holes to sift through the earth and get rid of all the debris.

The year before, the Government had introduced National Growmore Fertiliser, but George’s dad’s steaming manure, laced with spent hops from nearby breweries, did the job nicely! Before long, lines of stately ‘Home Guard’ potatoes grew majestically from the soil.

This must have been a formative experience for this group of boys. Ron remembers his old pals fondly.

‘They did a lot of work developing two bombsites in Russia Lane, one for allotments and on the other one they built a push bike race track,’ he recalls. ‘It was great, we had wonderful times, even when Hitler was dropping bombs on us.’

Word of this intrepid new breed of gardener spread, and on the 17th June 1943, the Queen visited, accompanied by the Mayor and Sir Wyndham Deedes. Where once she toured during the Blitz to raise morale in the bomb-shattered district, now she came to admire their veg. The royal group visited Brady Street, Warley Street, St Peter’s Avenue, Ravenscroft and Belhaven Street Allotments, as well as a piggery – where unfortunately a stray goat nibbled her Majesty’s handbag!

The intrepid bombsite allotment scheme ended when the war did, as local councils began the huge post-war slum clearance schemes, but 75 years on, its success resonates.

Like crafting, there is no doubt that gardening is primal; a source of comfort and escapism. We may no longer be a country Digging for Victory, but we are a country digging for meaning, escape, purpose and increasingly, sustainability.

A report commissioned by the National Garden Scheme urged us as a nation to promote gardening as something that can play a powerful role in promoting physical and emotional health. It even encouraged doctors to prescribe gardening for patients with cancer, dementia and depression. This will come as no surprise to those who survived the war years.

Dig for Victory, like Make do and Mend, was one of the most iconic and enduring slogans of wartime. Something tells me the ingenious and enterprising followers of Life At The Zoo would do just fine.

The Bethnal Green Bombed Sites Producers’ Association and many other fascinating true tales are the inspiration behind Kate Thompson’s latest novel, The Allotment Girls, published by Pan Macmillan. Available now on e-book, and WHSmith and other retailers from March 22nd.

Come say hi to Kate on: