Today, we were lucky enough to find a female Stag Beetle in our garden! Living in a very Urban environment, with a small, nature unfriendly garden, this was a very exciting discovery for us. The kids at first thought it was a Stink Beetle, which do have some similarities, but generally are much much smaller. So it was great for us to look at it and discuss.. as well as discuss that the Stag Beetle is endangered here in the UK and that we must do everything to protect it. (See our video below, too cute!). 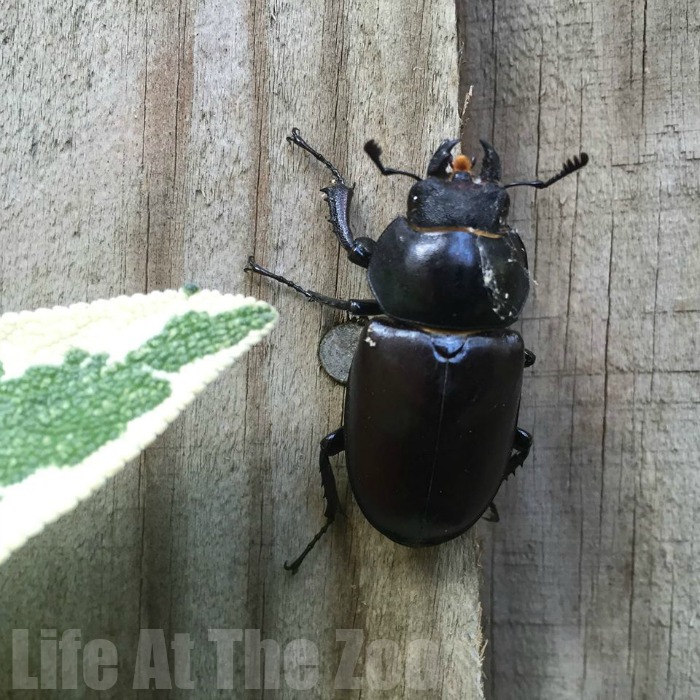 Mike Strick recently posted THIS on Facebook and I shared it with my children and my friends (please visit this link and share with your friends and family):

Every year in early summer, the stag beetles emerge to find mates. They have spent the first five to seven years of their life underground as larvae and now have just a few short weeks to live as adults.

Every year I’m shocked by how many people fail to recognise these icons of British wildlife, and am saddened by how many beetles end their lives crushed underfoot. Stag beetles have been around virtually unchanged for millions of years, and are not equipped to survive in an urban environment. Their numbers have declined drastically over the past few decades and the species is seriously endangered.

If you see one on a pavement, please move it out of harm’s way. Despite being large (the male can be up to three inches long), they are placid and harmless provided you don’t stick a finger between the male’s large ‘antlers’, which can inflict quite a strong pinch. Pick them up gently with finger and thumb on either side of the thorax (the middle part of the body, behind the head) and move them into a garden or similar.

Please keep an eye open for them. In flight in the early evening they are phenomenal, flying in an upright and rather ungainly style, making a noise like a small fighter plane. They tend to make a pretty uncontrolled landing, often ending up on pavements, which is where you’re most likely to see them and where they need your help to get to safety. The recent high winds are probably giving them trouble, meaning that they could end up in particularly tricky situations.

If you have children, it would be a big help if you could make sure they know about stag beetles too. Kids probably come across them more frequently than their parents. If they know what they are and what to do, the beetles are more likely to survive the encounter!

These are spectacular animals. We really have nothing else like them. It would be a shame if we lost them forever.

And then… we were lucky enough to discover……